Father Nicholas Smayra was born in Beirut (Ashrafieh) on September 16, 1973.

He completed his secondary school in 1992 at Zahrat El-Ihsan, whereupon he joined the Theology Institute of  the Our Lady of Balamand Monastery.

After graduation Father Smayra  served at the Archbishopric of Beirut  for a year and three months until he was ordained deacon on September 14, 1998 in St. Georges Church – Souk El-Gharb. 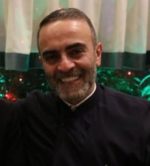 His Eminence, the most Reverend Elias assigned him to serve in St. Demetrius Church in 2001 as a deacon, where he became the spiritual guide for members and youth of the congregation., He  became a priest in the same church on June 16, 2003. (See St. Demetrios website for information about Father Nicholas Smayra’s work and accomplishment in that church).

In 2008, in  cooperation with Father  Philip Said, Father Nicholas was assigned as general 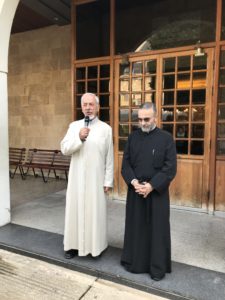 manager of the Office of Christian Education related to the Archbishopric of Beirut. At the School of St. Quartos for Theological Education, Father  Nicholas introduced and ensured the use of a new religious education program.

Another important achievement  in the section of Religious Education was the release of  “We are the Children of Jesus” book for three different age groups.  He also undertook the spiritual guidance of the students of Zahrat El-Ihsan School from 2012 to 2014.

In cooperation with Father Romanos Gebran, Father  Nicholas worked on the release of CDs containing liturgical chants performed by the Romanos Orthodox choir and the release of the service of the divine liturgy,   as well as, organizing many choir concerts in various Orthodox churches.

Father Nicholas is a member of the Adyan Foundation where he participated in the release of the book “Role of Christianity and Islam in promoting Citizenship and Living Together.”  He has participated in several conferences organized by the foundation at home and abroad.

Father Smayra is a member of  Board of Trustees of the Annunciation Orthodox School – Beirut.

Father Nicholas has organized many lectures and trips locally and abroad for the orthodox community.

At our church Father Nicholas contributed to improved staff management. With Father Germanos,  he is organizing prayers, lectures, and congregational meetings.

Father Smayra is a member of  the Religious Education Advisory Committee that is supervising and organizing the religious education program of the church. He is as well an effective participant and organizer of other educational and  congregational activities.

Father Nicholas is instrumental in the renovation and improvement of the administrative and congregational spaces of our church and is taking the lead in the master plan project for  the church compound.

Father Smayra is married and has three sons. 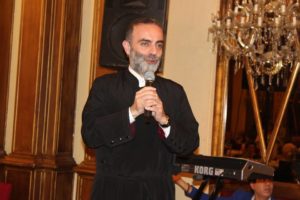