Whoever  attunes himself and studies the meaning of sacred songs from beginning to end will find himself approaching God.

Byzantine Chant, the sacred chant of the Orthodox  Church,  was developed in Byzantium from the establishment of its capital, Constantinople, in 330 until its fall in 1453. It is of composite origin, drawing on the artistic and technical productions of the classical age, on Jewish music, and inspired by the monophonic vocal music that evolved in the early Christian cities of Alexandria, Antioch, and Ephesus.

Throughout  the centuries,  the  hymnographers incorporated into their hymns  the  theological and doctrinal foundations  of the church  for the purpose of  instructing  spiritually the  faithful and building up their faith.  Someone once asked Father Georges Florovsky   ( Orthodox theologian ) where was the best place to go to learn the teachings of the church. He is said to have replied: “Go and stand next to the chanter’s stand for a full year and you will learn the theology of the Church.”

Mitri Murr (1880-1996) was a famous Lebanese chanter with a beautiful voice who received  many medals for his contribution to the ecclesiastical  music of the Orthodox Church.   He was  a composer as well as a translator of ecclesiastical music from Greek to Arabic. In his translations,  he made  every effort   to adapt the Arabic text to the  original Greek music. In this way he developed a school of music that many chanters follow to this day.

Mitri Murr’s  son,  Elias,   faithfully followed his father’s musical style throughout his long career as the main chanter at St. Mary’s Orthodox Church of Dormition.  Like his father,  Elias  had a strong, beautiful voice and was considered one of the best chanters of liturgical music in the Antiochian Church.   After more than 50 years of service in our church,  Elias Murr  retired in 2011.   In January 2004,   we  celebrated his many years of faithful service and contribution to the liturgical life of our church with a choir concert  attended by His Eminence Mgr. Elias Audi. Read more

The current main chanters of our church are:

Elie started chanting in the choir of the Greek Orthodox Archdiocese of Mount Lebanon.  He then pursued his liturgical studies and incantation with Professor Mikhail Hourani. He has participated in numerous evening recitals with the Mount Lebanon Orthodox Choir and the Choir of the Beirut Greek Orthodox Archdiocese and the choir of Prof. Michael Hourani.  The above mentioned choirs have performed at Our Lady of Balamand Patriarchal Greek Orthodox Monastery, the American University of Beirut and the St Joseph Jesuit Church. Elie has participated in  recitals abroad, most notably in the city of Stavanger in Norway.

François started chanting in 2005.  He was a member  of the School of Ecclesiastical Music “SEM”s main choir from 2008 till 2015.  In 2015 he joined the Theotokos Orthodox Choir.  He has participated in several recitals performed by the two choirs in Lebanon and abroad; most recently he participated in the recitals performed by the Theotokos Choir in America, Poland, and Romania.

Rafik started chanting at the age of 13, and he then joined the Saint Romanos School of Music where he studied Byzantine music under the guidance of Rev. Romanos Gebran and graduated in 2016.  He is a member of Saint Romanos Choir of Beirut Orthodox Archdiocese.  He has participated in several recitals performed by the choir in Lebanon (Tripoli, Zahle, Broumana, and Marjeyoun), in addition to their annual Nativity and Easter recitals in different churches in Beirut Archdiocese. 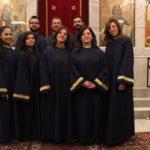 The additional members are: