Father Germanos was ordained in 1970 and was appointed the same year to serve in St. Mary’s Orthodox Church of Dormition to assist Father John Sakkab.

Father Germanos was born in Koura in North Lebanon in 1938.

At 13 years of age he entered Balamand Seminary (Koura) as a boarder and secondary school student After completing his secondary schooling, he traveled to the Greek island of Patmos where for two years he studied Greek, Latin and Ancient Greek. He then entered the University of Athens where he received his degree in theology in 1963. 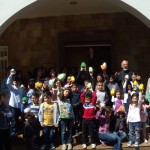 In the early eighties, he was a member of the committee that established a program for a united Christian education. In 1994 Metropolitan Elias Audi bestowed upon him the title of Iksarkhos.Father Germanos has participated in many conferences on religion both abroad and at home. He has served as a member of the Ecclesiastical Tribunal of the Beirut Archdiocese since 2004. He is married and has two daughters.